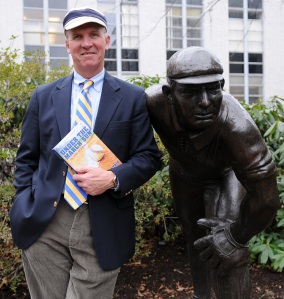 Author, journalism professor and mediocre athlete, Charles Fountain was born and raised in Palmer, Massachusetts and educated in Palmer public schools. His boyhood was split between reading Hardy Boys and Chip Hilton books, and playing every sport he could. While the books and sports have changed; the habits have lasted a lifetime.

A graduate of Boston College and the Columbia University Graduate School of Journalism, he began his journalism career as a sportscaster at WSMW-TV in Worcester, Mass, and worked for six years as a sports reporter for ABC Radio. Since 1985, he has been a member of the journalism faculty at Northeastern University, where he teaches courses in journalism history, sportswriting, feature writing, and basic and advanced reporting.

The Betrayal: The 1919 World Series and the Birth of Modern Baseball, was named one of the best books of 2015 by The Boston Globe, and was a finalist for the Society of American Baseball Research “Larry Ritter Award.”

Publisher’s Weekly called his first book, Another Man’s Poison: The Life and Writing of columnist George Frazier, “an excellent biography of a stylish yet unhappy man that also captures the jazz and publishing scenes of the forties, fifties and sixties.”

Sportswriter: The Life and Times of Grantland Rice was hailed by the Chicago Sun-Times as “one of the best newspaper biographies of recent years.”

His definitive history of baseball’s spring training, Under the March Sun, was praised by syndicated reviewer Allan Barra as “that rare baseball book that also serves as cultural history.”

His writing has appeared in more than fifty newspapers and magazines, including The Boston Globe, The Washington Post, the Los Angeles Times, the New York Daily News, The Philadelphia Inquirer, USA Today, The Christian Science Monitor and the Columbia Journalism Review. He appeared frequently on the ESPN SportsCentury series, commenting on the myth and culture of American sport. He has also appeared on National Public Radio, and on radio and television stations across the country.

Fountain ran on the track team at Boston College, and following college competed seriously for several years in the sport of biathlon. He still cross country skis, runs, cycles and plays golf, but most of his athletic energies these days are devoted to rowing on the Charles River.

He and his wife Cathy live in Cambridge, Massachusetts and vacation in Vero Beach, Florida.